Great local spot in Winter Park. Had a great meal here with a group of friends for a birthday party. Everything was great and the service couldn't have been better!

Great local waterfront bar with an upscale Miami-like vibe. Bring your sunblock and your wallet, you'll need both!

I could eat their Belgium waffles and strawberry butter everyday for the rest of my life. AH-MAAAAY-ZING!!!

Zydeco is a great spot right in the heart of Ybor City. The food is amazing and the beer selection is second to none.

Being a Chicago native, I absolutely love Lou Malnati's deep dish pizza. Giordano's is right up there with LM, with one major bonus.... I don't have to fly 3 hours in a plane!! I just have to drive 40 minutes from Plant City and I have some of the best deep dish right here in Central Florida!!

Eddie V's reputation as one of the best restaurants in Tampa is very well deserved. Had a business dinner here and everything was phenomenal.

Great place to watch the game and play some pool!

Had a great time at the everything Buffalo party!

Gotta love their wings! Typically I'm not a fan of lemon pepper...but these are incredible! Plus, their Atomic hot sauce... by far the hottest of any chain wing joint.

The best seafood in downtown Sarasota!

My new go-to for ice cream in Tampa! You know a place is good when you're already planning what you want the next couple of times you go back!

Great spot for lunch! The philly & the Greek salad with lamb chops are amazing! Don't forget the cheesecake.

As a vinyl junkie, this is the place you want to spend endless hours digging thru record bins! Tons of selection.... music for everyone!

Jon Reviews on CineBistro 2 months ago

The original!! I've been going to Tijuana Flats since they opened store #2 in Lake Mary back in the early '90s. Never knew at that time how much I loved hot sauce! Their "Don't Be A Chicken Shit!" hot sauce is the best for tacos!!

Daiquiri Deck is the place to be on St. Armand Circle! Love this place!

Host   2 months ago
Good times had by all. 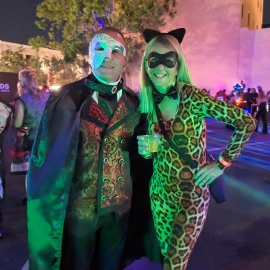